Steam has a top seller list to let people know which games are popular on their website. One of the games that’s on that list is Raft, a survival game that’s developed by Redbeet Interactive. It was released in 2018 but it is still in early access. Despite all of this, it’s one of the top-selling games on Steam, beating out hundreds of titles. But why is this the case? Why is this early access game very popular and is being purchased by many people? Let’s discuss it in this article.

The Survival Game That is Raft

Raft is a survival game where players are stuck in the middle of the ocean while on a 2×2 raft. They have nothing on them except a hook and some floating debris. And like with any survival game, the goal of players here is to make sure they survive. This means gathering resources, finding a source of food and water, and so on. But unlike in most survival games, you won’t be chopping trees here. You will be using your hook and then getting the various debris to turn them into a useful item. Of course, no survival game is complete without any dangers that players must be wary of. Since the setting is in the ocean, sharks are going to be your main problem. They will attack players who dive into the water. They will also occasionally chop off a piece of your raft, so you have to be wary of them. Raft is a survival and base-building game that’s set in the middle of the ocean.

This game is still in early access, which means the game is still not yet complete. It’s not yet the final product and it will still evolve. And recently, it got an update, Chapter Two of the game, giving players new content to enjoy. Now that you know what Raft is, let’s discuss what makes it a popular game. 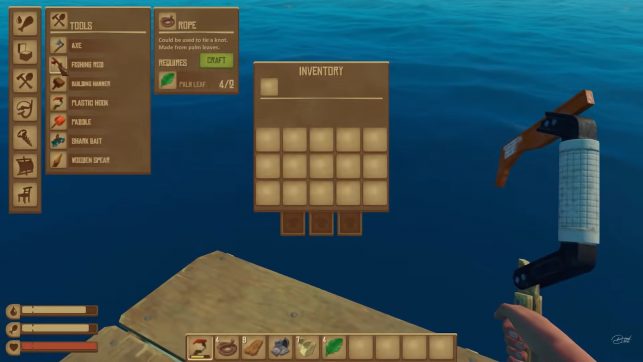 Playing Around with Its Unique Concept

Probably one of the main things that attract people to this game is the fact that the concept is unique. Sure, there have been some games before that tried the concept of surviving while in the middle of the sea. But no game has done it in a way that Raft has. What’s unique here is that the world seems to be covered in water, with only an occasional island appearing.

But the island is something that players can only use to gather resources. They still have to go back to their raft. They will try to survive while on their raft that they must constantly upgrade. It’s not common for early access games to offer multiplayer game mode. Since it’s something that usually becomes available when the game is about to be completed, but not with Raft. This survival game already offers multiplayer access and it’s not even buggy. This means players can start playing this game with other people or their friends and not experience any issues.

This is a huge deal, especially for a survival game like this one. The multiplayer access makes playing Raft more fun. The multiplayer mode is already enough to attract hundreds of players.

Another great thing that attracts players to this game is the great unknown adventure that awaits as you play. This is because this game doesn’t follow any maps or places that you need to go to. Since you’re stranded on the ocean, where you will go will depend on where the sea will take you. So you have no idea what will happen. You never know if you will stumble upon an island that contains the resources you will need.

Raft Steam How To Use Anchor

You don’t even know when you will encounter another human in the game. And that unknown can be a big draw for many players. It’s like playing in an open-world game where anything goes. But the main difference here is that you don’t have a lot of control. It can be very exciting since you have no idea what can happen at any time.

The Creative Element of The Raft Game

Minecraft adventure mode wiki. Another thing that people love about Raft is the creative element that it offers. One of the things that you will do constantly is to build and expand your raft. Now, there’s no blueprint on what your raft should look like. That’s clearly up to you, which means you can let your creativity loose and design a beautiful raft fortress. Just make sure you have the resources for it. So that’s about it for Raft. Steam’s top-selling survival simulation game. Try it out for yourself, and join the fun!

§ Please Pass By My Office