Monstroid privacy policy Terms of transaction Monstroid license terms Jireh Roberts, Inc. Built the Monstroid app as a Free app. This SERVICE is provided by Jireh Roberts, Inc. English A giant lake monster, after lying dormant for years, reawakens and starts killing people in a small Colombian town. You can find out more about this movie on its IMDB page.

This page is used to inform visitors regarding my policies with the collection, use, and disclosure of Personal Information if anyone decided to use my Service.

If you choose to use my Service, then you agree to the collection and use of information in relation to this policy. The Personal Information that I collect is used for providing and improving the Service. I will not use or share your information with anyone except as described in this Privacy Policy.

Information Collection and Use

For a better experience, while using our Service, I may require you to provide us with certain personally identifiable information, including but not limited to This app is free to everyone,anyone can play. The information that I request will be retained on your device and is not collected by me in any way.

The app does use third party services that may collect information used to identify you.

I want to inform you that whenever you use my Service, in a case of an error in the app I collect data and information (through third party products) on your phone called Log Data. This Log Data may include information such as your device Internet Protocol (“IP”) address, device name, operating system version, the configuration of the app when utilizing my Service, the time and date of your use of the Service, and other statistics.

Cookies are files with a small amount of data that are commonly used as anonymous unique identifiers. These are sent to your browser from the websites that you visit and are stored on your device's internal memory.

This Service does not use these “cookies” explicitly. However, the app may use third party code and libraries that use “cookies” to collect information and improve their services. You have the option to either accept or refuse these cookies and know when a cookie is being sent to your device. If you choose to refuse our cookies, you may not be able to use some portions of this Service.

I may employ third-party companies and individuals due to the following reasons:

I want to inform users of this Service that these third parties have access to your Personal Information. The reason is to perform the tasks assigned to them on our behalf. However, they are obligated not to disclose or use the information for any other purpose.

I value your trust in providing us your Personal Information, thus we are striving to use commercially acceptable means of protecting it. But remember that no method of transmission over the internet, or method of electronic storage is 100% secure and reliable, and I cannot guarantee its absolute security.

Links to Other Sites

This Service may contain links to other sites. If you click on a third-party link, you will be directed to that site. Note that these external sites are not operated by me. Therefore, I strongly advise you to review the Privacy Policy of these websites. I have no control over and assume no responsibility for the content, privacy policies, or practices of any third-party sites or services.

These Services do not address anyone under the age of 13. I do not knowingly collect personally identifiable information from children under 13. In the case I discover that a child under 13 has provided me with personal information, I immediately delete this from our servers. If you are a parent or guardian and you are aware that your child has provided us with personal information, please contact me so that I will be able to do necessary actions. 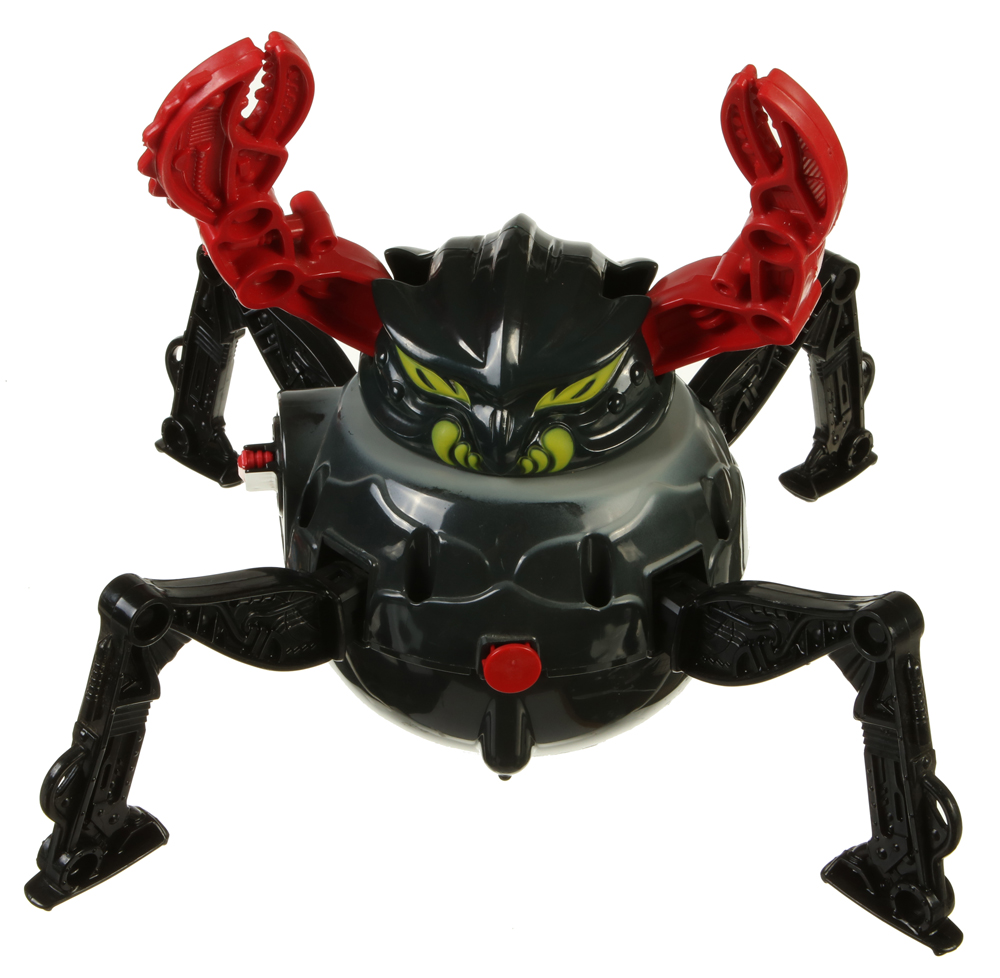 Monstroid is a 1980 American monster movie produced and directed by Kenneth Herts [1] (as Kenneth Hartford), co-written with Herbert L. Strock, and starring James Mitchum and John Carradine. Strock later claimed he co-directed the film uncredited.[2] It was originally to be titled Monster when the film was first announced in 1975, and again in 1977, and suffered numerous cast changes (Keenan Wynn was still billed on some of the early video releases). The film was eventually released in 1980 as Monstroid, and is also known as Monstroid: It Came from the Lake (American DVD box title) and The Toxic Horror (American alternative title). A novelization written by Peter Crowcroft was released concurrently with the film. Hartford had his own children (Glen and Andrea) play the two teenagers in the film.[3]

The film billed itself as being based on a true story that took place in 'Chimayo, Colombia', in 1971.[4] However, the film was actually shot in Chimayo, New Mexico, and Ambalema, Colombia.[citation needed] Some of the film was also shot in the Santuario de Chimayo, with John Carradine playing a priest.[5]

One night in the fishing village of Chimayo, Colombia, María Reyes witnesses a monster devouring her husband José. Some years later, the American cement manufacturer Durado Cement dispatches troubleshooter Bill Travis (James Mitchum) to Chimayo to restore order to their manufacturing plant there: an anticorporate activist named Víctor Sánchez has been exploiting the villagers' fear of the monster to stir up hostility against Durado, which has been polluting their fishing waters in Lake Chimayo. In the process, María has become ostracized from the villagers; a group led by a man named Carlos calls her la bruja ('the witch'). In addition, Travis must silence an American TV reporter named Patty Clark, who has been exposing the pollution of the lake.

In Chimayo, children Andrea and Glen Anderson observe strange ripples in the lake. Glen claims they belong to an animal he has been sighting in the lake for some time. Their father Pete (Anthony Eisley), administrator of the Durado plant, is introduced to Mayor Montero and his daughter, helicopter pilot Juanita. Sánchez meets with Carlos in a church, and together they plot to drive out the Americans and the monster he thinks was created by the pollution of the lake. When María goes to visit José's grave, Carlos's men attack her.

Juanita picks up Travis at the airport. When he gets to Chimayo, he is accosted by Clark, and curtly refuses any interviews. Meanwhile, Pete is trying to break up with his secretary Laura to pursue a new affair with Juanita, but cannot bring himself to do it. He visits her again that night when she is skinny dipping in the lake, and successfully breaks up with her, but the monster emerges from the lake and kills Laura after he leaves. The town is busy celebrating its 200th anniversary and the body goes undiscovered until the next morning.

Travis and the plant doctor investigate the killing, and link it to José's death. Glen tells Travis about the animal he saw, convincing Travis that something is in the lake. Soon afterwards, Sánchez meets Travis and threatens violence against Durado. Travis and Montero confront Clark about her reporting, and they negotiate exclusive rights to the pollution story in exchange for her temporary silence. Travis also calls his boss Barnes (Philip Carey) to request sonar equipment with which to track the monster. Determined to prove the monster's existence, Glen decides to stake out the lake at night. He drags Andrea along, and they manage to take some photographss of the monster before it attacks some drunken fishermen.

They present their evidence to Travis while the village continues celebrating its anniversary. Simultaneously, Sánchez sets some plastic explosives to blow up the plant. However, he gets trapped after lighting the fuse. Meanwhile, a party of men chases María, whom they blame for all their troubles. The town priest (John Carradine) claims that he can exorcise her, but the men are unconvinced and burn her at the stake. Sánchez's bomb goes off, and the next day, Travis reveals that the plant has been badly damaged and María severely burned. Consequently, she is airlifted to a Panamanian hospital in Chimayo's only helicopter to get treatment.

Travis comes up with a plan to kill the beast; he stuffs some explosives into a goat carcass, which he will hang by the detonator cord from a helicopter. To obtain a new chopper, Juanita lures some rescue workers with a fake mayday and hijacks their craft at gunpoint. They get to the lake and the Nessie-like monster takes the bait, but Travis loses the detonator and dives in after it. A local policeman distracts the monster by circling it with his boat, thus buying Travis enough time to retrieve the detonator and blow the creature to pieces.

Some time later, though, the Andersons are down by the lake again, and their German Shepherd finds a large egg. A reptilian creature hatches out of it, and the film ends as the camera pans over a clutch of dozens of similar eggs.

The film made its debut on DVD by Shout Factory on September 25, 2007 as a part of its Elvira's Movie Macabre double feature with Blue Sunshine. (Although the video case says Monstroid, the film's on-screen title reads Monster. Elvira however verbally refers to the film as Monstroid.)

It was later released by Substance under the title Monstroid: It Came from the Lake on January 15, 2008. On May 6th, that same year, it was released by Televista as It Came From the Lake.[6]

Monster received mostly negative reviews from critic upon its release. Joseph A. Ziemba from Bleeding Skull! panned the film, calling it 'a mess', criticizing the film as being endlessly talkative. Ziemba also criticized the film's acting, 'cut ‘n’ paste exploitation plot', phony monster design, and poor video quality.[8] Octavio Ramos from Axs.com gave the film a negative review, writing, 'Monstroid: It Came from the Lake is perhaps only of interest to residents of Northern New Mexico or anyone interested in the Santuario de Chimayo. There are actual filmed scenes of the interior of the Santuario with John Carradine, which is [sic] worth gold to some viewers. Otherwise, don’t bother with this movie. It is in all ways a disappointment.'[5]