2 days ago  The Sindh government has decided to build a mausoleum over Shahenshah-e-Ghazal Mehdi Hasan Khan’s grave due to the existent state of the grave being in unsatisfactory and poor conditions. Mehdi Hasan was an eminent Pakistani singer who composed perpetual content for the Pakistani showbiz industry. He is particularly remembered for his ‘ghazal singing’ and was bestowed with the. MSNBC host Mehdi Hasan has called on liberal Supreme Court Justice Stephen Breyer to retire from the bench after he spoke out forcefully against court-packing earlier this week.

The @MehdiHasanShow is heading for @MSNBC.

I'll be hosting my nightly show not only on @peacockTV but also hosting it on @MSNBC every Sunday night, live from 8pm Eastern.

Do please tune in, starting this Sunday, Feb 28th.

Hasan is a former journalist for Al Jazeera, where he hosted the show 'UpFront.' He has also been a senior columnist for The Intercept and the host of that outlet's podcast 'Deconstructed.'

Known for his direct and sometimes confrontational interview style, Hasan has also been unafraid to engage in public disputes with politicians and other journalists on social media.

In December, Hasan took to Twitter to condemn a tweet by Newsweek opinion editor Josh Hammer as 'racist.' Via his tweet, Hammer had shared a clip of Hasan's show along with the comment, 'Your Qatari $$$ at work.' The clip showed Hasan discussing Palestinian-Israeli relations and Israel's 'de facto,' as he described it, annexation of the occupied territories.

In July of 2019, Hasan asked Sen. Marco Rubio (R-Fla.) - also via Twitter - to delete a tweet Rubio had made that included another clip of a Hasan interview, this one with Rep. Ilhan Omar (D-Minn.). Hasan said the clip had been 'selectively-edited.'

In response to CAMERA's communication with MSNBC officials, Mehdi Hasan yesterday published a clarifying pinned tweet noting that the circumstances of the incident are unclear and disputed, and providing a link to a Times of Israel article with more information. See below for a detailed update.

Apparently emboldened by MSNBC's failure to broadcast a clarification debunking the grotesque falsehood that Israel is burning down Palestinian villages, a libel which Mehdi Hasan allowed to pass without challenge Feb. 5 on 'All In With Chris Hayes,' the MSNBC host again promotes egregious, unverified anti-Israel smears.

On April 9, Hasan retweeted a video by Palestinian activist Issa Amro which stated:'A Palestinian child from Hebron was shot in his eye, he got a rubber bullet which was shot by an Israeli army sniper. The video is clear, the child didn't show any threat on the soldiers. He was inside a vegitable [sic] shop.' Contrary to Amro's claim, there is nothing at all clear about the video. It does not show any Israeli army sniper, an Israeli shooter, or any shooter at all. It is impossible to understand from the video the context of the events and what and who hit the boy.

Every US lawmaker who blindly votes for military aid to Israel every year, and robotically claims that Israel shares US values, should be forced to watch videos like this and answer how is this militarily justified and how are these the values we claim to share/cherish? https://t.co/W79WeT9UO2

Nevertheless, Hasan retweeted the propagandistic item without having undertaken any investigation or verification. 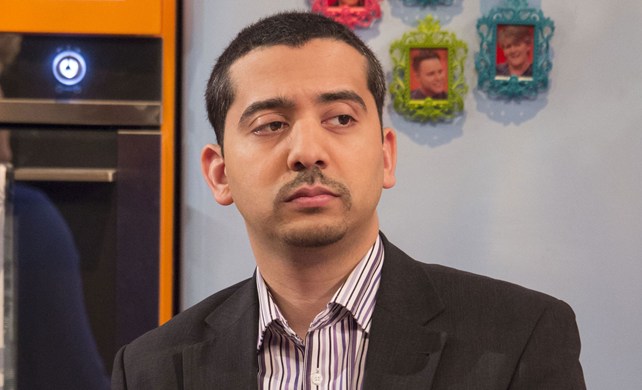 Yesterday, a violent riot was instigated in the city of Hebron. During the riot, dozens of Palestinians hurled rocks, some using slingshots, at IDF troops. IDF troops responded with riot dispersal means, including rubber bullets. Rubber bullets were not fired towards stores or bystanders. Following a report regarding a Palestinian who was injured in a store close to the area of the riot, the incident was examined. The examination concluded that there was no direct fire towards the store at the individuals inside.

Thus, while there is uncertainty about the circumstances (the army's account leaves open the possibility that a rubber bullet ricocheted and hit the boy), what's certain is that the army categorically denies Amro's libel that the child, identified as Izz el-Din Nedal al-Batsh, was targetedby an Israeli sniper. (Conricus said as far as he knows, no Israeli snipers were at the scene.)

Yet, the lack of verification and the army's adamant denial of having targeted a child with a sniper didn't stop Hasan from retweeting Amro's libel and advocating for the cutting of US funding to Israel based on the unverified propaganda:'Every US lawmaker who blindly votes for military aid to Israel every year, and robotically claims that Israel shares US values, should be forced to watch videos like this and answer how is this militarily justified and how are these the values we claim to share/cherish?'

In a reversal of the standard journalist practice of first investigating and verifying and then reporting, Hasan subsequently issued a very weak acknowledgment that his claim about the targeted shooting is unverified even as he endorsed his source's credibility, stating: 'To be clear: this alleged shooting needs to be investigated by both media and human rights organizations. The tweet I shared is from award-winning activist @Issaamro; So far, the claim is being made by Wafa, the news agency of the Palestinian Authority.'

Hasan has not shared with his one million followers any of the following key points, each of which undermines the veracity of his initial tweet: 1) the army categorically denies having targeted the child or stores, contradicting a claim by the boy's cousin; 2) Palestinians were involved in a violent riot, with dozens hurling rocks at soldiers, at the time of the incident; 3) Amro is an anti-Israel activist who supports the use of violence and was recently convicted of assaulting a soldier.

Does tweeting completely unverified, disputed propaganda without any investigation comply with NBC policy on social media use? CAMERA contacted NBC Universal, urging a forthright apology making clear that Hasan should have not shared the unverified libel as there is no evidence to suggest an Israeli sniper targeted the boy or fired, or that Israeli troops fired directly on the store, or that there were any Israeli snipers were in the area.

In addition, CAMERA reminded MSNBC that over two months have elapsed since Hasan failed to challenge his guest on the 'burning of Palestinian villages' lie and, inexcusably, the network has yet to set the record straight. Indeed, by failing to issue a forthright correction, MSNBC sends the message to Hasan and his colleagues: journalistic integrity at the network is out; grotesque vilification of Israel with unverified (at best) and blatantly false smears is in.

In response to communication from CAMERA, Hasan published the following pinned (as of this writing) tweet:

His family say IDF shot 14-year old Izz al-Din. He lost his eye: https://timesofisrael.com/palestinian-bystander-14-loses-eye-from-rubber-bullet-allegedly-fired-by-idf/… We don’t know if it was deliberate or what the context was on the ground, there are conflicting accounts, but it’s horrific to be hit with a rubber bullet. There needs to be an investigation.

By compelling Hasan to publish a tweet acknowledging that the circumstances of the shooting are unknown, MSNBC signals that it expects its journalists to exercise caution on social media, and refrain from publishing unverified information as fact.

§ Evernote Link To Another Note